For English teachers, reading for pleasure can be tough.  After grading papers all day, the last thing I want to do is read more.  Also, my personal reading has become subtly oriented toward finding material for my courses; I seem to be approaching every novel and memoir through the (imagined) perspective of a (precocious) seventeen-year-old, and this alters my ability to enjoy things.

Nevertheless, I read some books for fun this year, and some of them I flat-out loved.  Here they are.

These books were not necessarily published in 2011, but they were part of my 2011 experience. 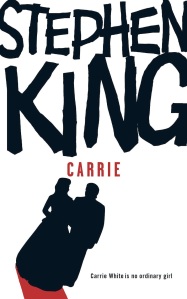 Yes.  Carrie.  I am not a horror fan, nor a Stephen King fan; also, I’ve never seen the film.  However, the morning of my birthday, I watched a video by Professor Adam Crowley in which he lectures undergraduates on the importance of reading, and recommends Carrie as a book everyone should read.  Later that afternoon, my present from The Husband arrived in the mail: a Kindle.  The great thing about a Kindle is that you can download samples; immediately after opening it, I got myself excerpts from eight different books: seven recent critically acclaimed literary masterpieces, and Carrie.  I read through all eight excerpts.  Not one of them did a thing for me except Carrie – the two seconds it took to download the full book were agonizing.  I read the whole thing in one afternoon and evening.  If you haven’t read it, do yourself a favour.  It’s riveting and elegant, although you’ll have to contend with a lot of menstrual blood and screaming.  In this story, King is the kind of writer I aspire to be: transparent, sensitive, and a little bit manipulative, all while making it look so easy. 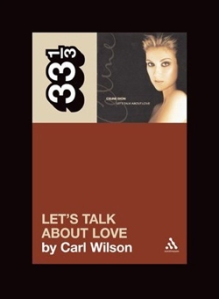 Again, I feel like some caveats are called for – appropriate, because this book is one long caveat.  I’ve been meaning to read it for years, not only because it has been so acclaimed, but also because I used to know Carl Wilson a little – he lived in Montreal, with a couple of my friends, for a while in the 90s, and he was always good company and a very funny storyteller.  Reading this book is like hanging out with him and listening to him rant, in the most articulate and entertaining way imaginable, about the horror that is Celine Dion and the horror that is his horror of Celine Dion.  In the process, he tells us a lot about art, class, taste, humility, and the pitfalls of being “cool.”  The last two chapters sent me into the open-mouthed paroxysms of intellectual delight that you always hope pop-culture analysis will bring about (and it almost never does.)  It’s a little tiny book.  You have nothing to lose but your pretensions. 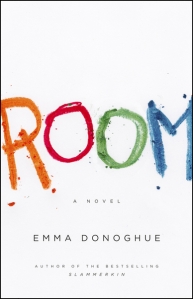 This book deserves every word of acclaim that it has received.  I had to take two stabs at it, though, because the first time, I was having a bad day, and it is not a book to read when you are having a bad day.  The story of a little boy who is being raised in captivity by his kidnapped and confined mother is totally convincing; Donoghue’s capturing of a very peculiar five-year-old voice will leave you astonished.  (I also read Donoghue’s Slammerkin and The Sealed Letter this year, and they are both also great.)

4. The Leftovers by Tom Perrotta 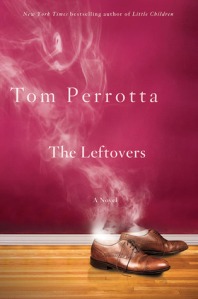 This book was a Christmas present from The Husband.  He knows what I like.  I love Tom Perrotta, from Election (yes, the movie was wonderful but the book was an entirely different kind of wonderful) to Little Children (ditto).  Perrotta’s writing is often called “dark comedy,” but I don’t really see it – The Leftovers is funny in spots, but is mostly a finely wrought character drama about the people who have been left behind after an inscrutable Rapture-like event, in which a seemingly random sample of the population up and disappears into thin air.  Apparently an HBO series based on the book is in the works.  CAN’T WAIT.

5. The Sense of an Ending by Julian Barnes 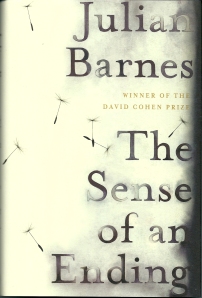 It won the Booker.  It deserved it.  This slender story, about a man who can’t let go of a long-defunct love affair, is both puzzling and satisfying.  The “sense” one has at the “ending” is that one wants to go back and read the whole damn thing again to see if one has properly understood.  There’s been some bashing – It’s too simple!  It’s too complex!  It thinks it’s complex but it’s really not! – but isn’t there always when a book wins a big prize?  I used to teach Barnes’ Talking it Over in my International Baccalaureate class, as it was the perfect vehicle for discussing the technique of point of view, and a theme that Barnes seems obsessed with: the unreliability of memory and the fallibility of any single perspective.  What really happened? is a question that any novelist – and anyone who cares about human life and nature – should really be thinking about all the time.

6. Paying For It by Chester Brown 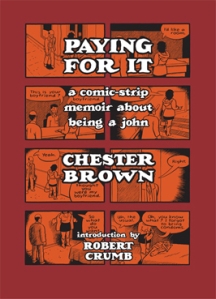 I’m certainly glad I never dated Chester Brown. (I’ve dated men who were something like him.  There were problems.)  That said, I’m also glad I read this book.  The subject wasn’t immediately appealing.  Brown decides that he’s had enough of the responsibility entailed in real “relationships,” but that he’s not willing to forego sex, and so the only rational move is to begin frequenting prostitutes.  This is a graphic – in all senses of the word – chronicle of the years that follow.  The illustrations of his sexual encounters are explicit yet clinical, terms that I expect apply to Brown himself.  One of Brown’s previous works is a lauded comic-strip biography of Louis Riel; it’s one of my favourite books, so I wasn’t altogether surprised by how much I loved this one.

7. The Hunger Games by Suzanne Collins 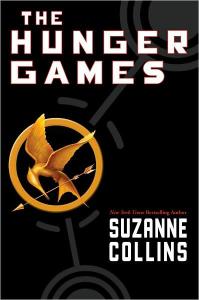 A student who had made it clear all semester that he had no intention of reading any of the assigned books, or any books at all for that matter, asked me out of the blue one day, “Miss, have you read The Hunger Games?  Would you be surprised if I told you that I read the first two books this weekend?  It’s actually interesting.”  Yes, folks, sometimes books are interesting.  Yes, this one’s great.  It’s just great, so just read it.  I am halfway through the second book now and am not having the same gripping experience, so savour the first one for all it’s worth. 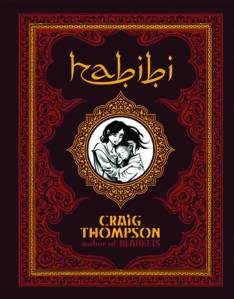 It will probably make you weep uncontrollably.  It’s very fat, but you’ll want to read it slowly, so, as graphic novels go, this one will take you a long time.  I’m not a visually attuned sort of person – when reading comics, I focus on the text and let the images wash over me – but this book won’t allow that sort of reading.  You need to immerse yourself in it entirely and linger over each page, if only to say, “Holy crap, this one frame must have taken him MONTHS.”  Stunning.

9. The Marriage Plot by Jeffrey Eugenides 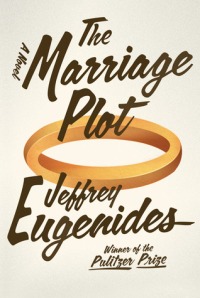 I struggled with myself over this one, and it made the list because I didn’t have enough reading time this year, and so couldn’t find a better candidate.  (Okay, belated English teacher’s New Year’s Resolution: less TV, more books.)  It was fine.  I loved The Virgin Suicides – I reread that this year, too, as I was teaching it – so I’ll always have a soft spot for Eugenides, but the story here is very slight, if mostly well told.  I moved along through it easily.  The characters were not loveable, but the brilliant manic-depressive Leonard was skillfully drawn.  I recognized the world Eugenides was capturing: recent college graduates trying to reconcile everything they learned about critical theory with the blood and mud of real life.  If you care about emerging adulthood and Barthes, give it a shot. 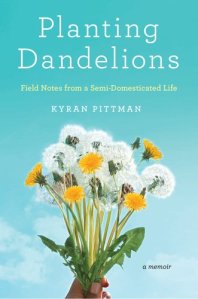 Full disclosure: Kyran Pittman and I grew up in the same small town, and her parents were family acquaintances; her father, the poet Al Pittman, was one of my professors at university.  Much of my pleasure from reading this “memoir” – more of a collection of personal essays – may have come from the sparks of real recognition I felt while reading it, as I encountered people and places familiar to me.  That said, it’s a lovely book.  Pittman details her flight from a little city in Newfoundland and an unhappy marriage, to Arkansas and a man she met on the internet.  Then she tells us about the years that follow, in which she and her new love marry, raise three boys, and build their life in a place as foreign to her as the Middle East might be.  I’ve always wanted to visit the south of the United States, and Pittman’s accounts give me a sense of how I might feel there.  She also helps me understand what it is to be a mother, and how it feels to have your little blog become a big phenomenon and, eventually, a book.  It’s fun and funny and honest, and manages to be cozy, exotic and totally ordinary, all at once.

Have you read any of these books?  What did you think?  And please, please tell me what to read next.

What do you think? Cancel reply