My meditation practice has fallen to the wayside these days.  It would be wise for me to return to it.  In November 2009, I was tired of a lot of things, and some Buddhist reflections were helpful.  In particular, I spent time thinking about the writings of Pema Chodron, a tattoo of the Buddha under the bodhi tree, and how hard times and irritating people are opportunities for growth.  My thoughts on these subjects appear below.  The upshot: being pissed off is not so bad, really.

I’ve just finished reading Pema Chodron’s Taking the Leap: Freeing Ourselves from Old Habits and Fears. If you’re not familiar with Chodron, she is the world’s most famous Tibetan Buddhist American nun, and her works are meant to help Westerners understand the precepts of Tibetan Buddhism and apply them usefully in their own lives.  I found Taking the Leap, like all her books, inspiring, reassuring, and helpful.

At one point, she describes a famous Buddhist image that I hadn’t heard of before.  Before mentioning the image specifically, she tells a part of the story of the Buddha that many people are familiar with.  When the Buddha sat under the bodhi tree (where he eventually attained enlightenment), Mara, “the evil one,” came along and tempted him with beautiful women, delicious food, insults, and all other sorts of distracting objects.  Chodron says,

In traditional versions of the story, it’s said that no matter what appeared, whether it was demons or soldiers with weapons or alluring women, he had no reaction to it at all.  I’ve always thought, however, that perhaps the Buddha did experience emotions during that long night, but recognized them as simply dynamic energy moving through.  The feelings and sensations came up and passed away, came up and passed away.  They didn’t set off a chain reaction.

This state of being – the ability to experience emotion without being “hooked” by it, without being dragged into a whole self-feeding narrative of, say, anger, self-righteousness, and more anger – is the subject of Taking the Leap and some of Chodron’s other works.  I’d be willing to spend the rest of my life working toward this state of mind.

For example, I’ve been seething because the students in my most difficult class absolutely refused to cooperate with an activity I asked them to do last week, an activity that is essential in preparing them to do their next assignment.  They talked when I asked them to work alone and quietly.  They insisted that they “had to leave class now” and that they should be allowed to finish the assignment at home, even though I had clearly explained that this activity was practice for an essay they would have to write entirely in class.  They refused to press themselves beyond the simple declaration that “I don’t understand this story.”

I couldn’t calm my irritation, my sense that their stubborn resistance was a personal attack.  There is, of course, room to explore whether the assignment I gave them was too difficult, whether they haven’t had adequate preparation, whether I’m expecting something they can’t deliver.  But the deeper problem is that I was angry with them, and couldn’t shake it.

It’s possible to see any difficult situation as an attack from Mara.  We’re under threat, and we can react angrily or with panic or self-loathing.  But there’s another possible approach.  We can see the attack as food for our growth, as an opportunity for us to develop loving-kindness, compassion, joy and equanimity.  Difficulties are fertile soil for training our minds, and can be greeted with eagerness and gratitide.

A situation like mine, for example, is an opportunity to develop compassion.  The day after this frustrating lesson, my Philosophy of Education teacher returned an assignment to me, and I didn’t do as well on it as I always expect to do on my coursework.  In reading through his comments, it became clear to me that I simply hadn’t understood the criteria he was evaluating me on, and didn’t understand the process of philosophical inquiry he wanted me to go through – in fact, I realized that I didn’t have a clear idea of what a “philosophical approach” entailed, and so had no way of engaging in it.  At first, I was furious and defensive.

And then I remembered my class from the previous day.  This is exactly what they were feeling, I realized.  They were feeling it for a number of different reasons, and the fact that they don’t understand is due to a number of factors that they could have controlled – by showing up to class more often, for example – but the feeling is the same.  I get it.  And understanding where they’re coming from, and why, can relieve some of my feelings of helplessness and irritation.

After Chodron retells the above snippet of the story of the Buddha, she mentions the image I’ve taken all this time to get to.  She says,

This process is often depicted in paintings as weapons transforming into flowers – warriors shooting thousands of flaming arrows at the Buddha as he sits under the bodhi tree but the arrows becoming blossoms.

Immediately after reading these lines, I put the book down and ran to Google Images to find a depiction of this moment.  I wasn’t satisfied with the images I found; none captured the beautiful scene in my imagination, the blazing arrows morphing into a shower of soft flowers and cascading around the Buddha like snow.  If I could hold a pencil steady, I would’ve tried to draw or paint it myself.  Finally, though, I found this image, by the artist Austin Kleon: 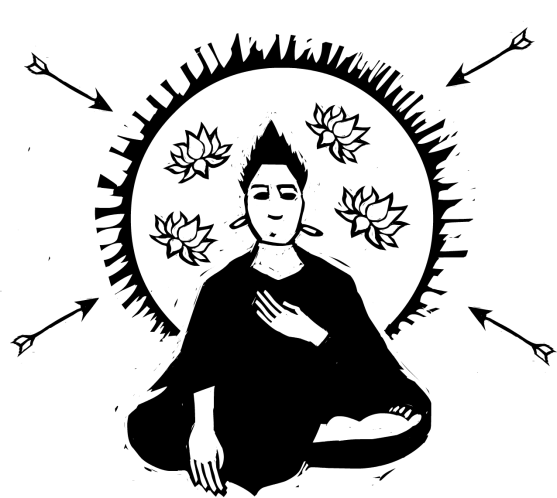 He describes the process of creating this image, a tattoo for a friend, here.  If I someday decide to get a tattoo, I may ask permission to use this.  In the meantime, I may have to post it on the cover of my course binder, to remind myself that every challenge can be transformed into flowers if I can only see it, not as a battle to be fought, but as an opportunity for growth and for deeper understanding of the human mind and the human condition.

This doesn’t mean I can make my students do what I want.  But maybe it means I can suffer less as I try to help them.